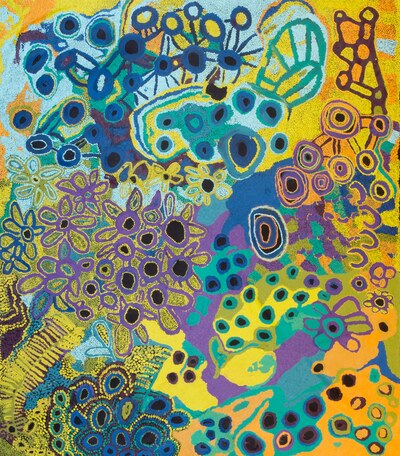 This Creation story follows the movements of a group of sisters who traverse the country evading the clutches of a lustful older man knownas Nyiru. Nyiru is pursuing the women to satisfy his desire for the eldest sister who he wishes to take for his wife. He is a sorcerer of sorts and can metamorphose into animals or plants and does this on several occasions in an attempt to capture the women but always they seem to narrowly escape. It is during these escapades that the landscape is created and formations left as ever present reminders of the power involved with creation beings. The women take a path north and eventually fly into the sky to become the Pleiades Constellation, one of the closest star clusters to earth.

Although each women knows this major Tjukurpa, they are bound by cultural protocol and custodial responsibility as to which country they can depict. As the country and Tjukurpa unfolds during the creation of a major work like this, the women ‘sing the place’ into reality. Traditional inma (singing and dancing) is triggered as the depictions of places, that the women may not have physically seen for many years, begin to manifest onto the canvas.