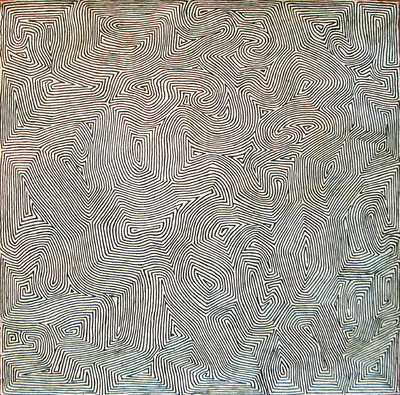 
This painting depicts designs associated with the soakage water site of Tjulurulnga, west of the Kiwirrkura Community in Western Australia.

During ancestral times two Ngangkari (Aboriginal Healers) were camped at this site after travelling from further west. The two men held ceremonies relating to the site while they were there. One of the men also performed healing techniques to remove sickness from the other, who was ill in the stomach.

Since events associated with the Tingary Cycle are a secret nature no further detail was given.

Generally, the Tingari are a group of ancestral beings of the Dreaming who travelled over a vast stretches of the country, performing rituals and creating and shaping particular sites. The Tingari Men were usually followed by Tingari Women and accompanied by novices and their travels and adventures are enshrined in a number of song cycles. These mythologies form part of the teachings of the post initiatory youths today as well as providing explanations for contemporary customs.