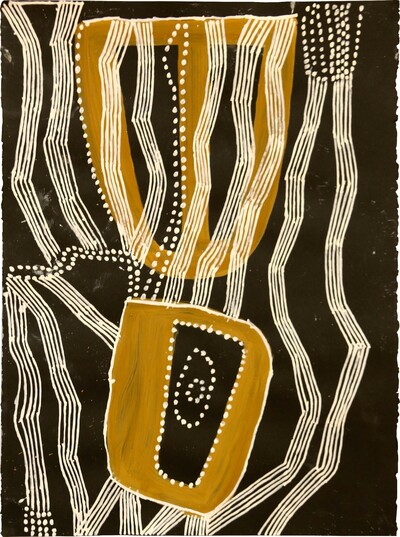 
Baratjala is a Madarrpa clan estate adjacent to Cape Shield where the artist camped with her father and his many wives as a young girl. It is of the essence of Madarrpa but does not hold the high order sites that Yathikpa does. She lived nomadically as part of a clan group with a flotilla of canoes between Groote Eyelandt and the mainland. Her father’s name was Mundukul (Lightning Snake) and this is also the name of the serpent (also known as Water Python, Burrut’tji or Liasis Fuscus), which lives deep beneath the sea here. These are cyclonic, crocodile infested waters with huge tides and ripping currents and she is part of them.