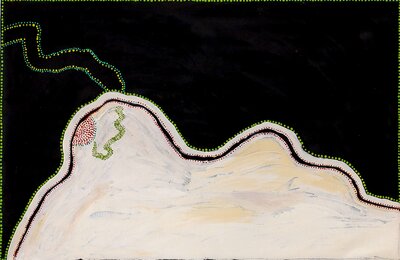 
Timo has painted the site of Pukunkura (Lake Baker) which is situated on the north west boundry of traditional Spinifex Lands. He has authority to paint this country through his direct paternal line. Lake Baker holds the Wati Kutjara Tjukurpa (Two Men Creation Story) within it. The Two Men approached the lake when one sees water at the far edge and hurries to the source, only to be trapped in the rockhole. He is now a Wanampi (Water Serpent) who today still resides in that rock hole. Extreme caution must be observed when present here. There is a ritual of washing ones feet and underarms and singing a sacred song to show respect to the Wanampi. This is still a dangerous place and is strictly a ‘Mens’ site and women must not stop here.

The second Man is also at this site but he has become a papa (dingo) and resides off to one side. He is said to be a giant beast who is dangerous. Anangu (Aboriginal People) are warned not to stop at this site.