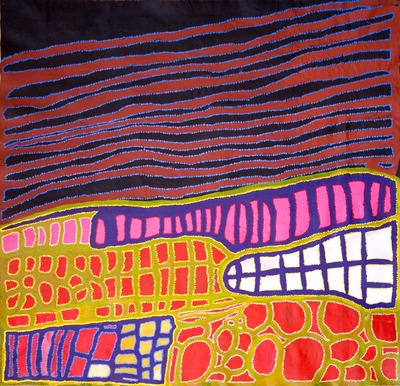 
Anmanari has painted the Seven Sisters at Kuru Ala. In this Tjukurpa the sisters are travelling across the desert all the time being pursued by Wati Nyiiru a lustful old man who is trying to get the older sister for his wife. They don’t want this old man and are frightened by his sinister and relentless tracking of them. This man is a creation being and thus has magical powers. As a shape shifter he transforms himself into plants and animals in order to deceive the women and get close enough to steal Kampukurtja (the eldest sister) from them. Drawing on ancient tradition Anmanari's works are bold and powerful abstractions of country, visual maps tracing the journeying of the ancestor beings and the land formations they created through their activities. Her recent works have moved away from any figurative representation found in her early works to broad brush strokes of colour; circles (representing water holes and or the women) and patterned lines (representing ceremonial dancing and travelling sand tracks).

Anmanari was assisted by Veronica Brown, her grand daughter, on this work.