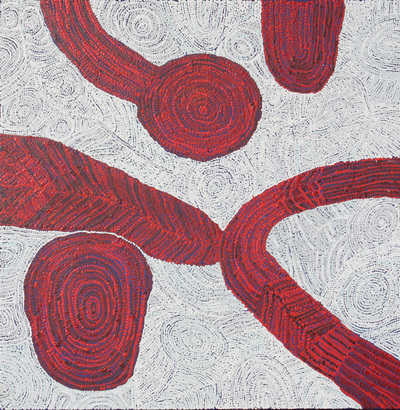 
Antara is a sacred place for Anangu. It holds many tjukurpa (songlines) stories that cross this land. This painting depicts this special place. Antara has a very important rockhole where the women would perform inmaku pakani, a dance ceremony that would create enough maku for everyone. The painting also depicts the landsacpe which is surrounded with rocks, rockholes, creeks and mountains.

Mimili is sited within the beautiful Everard Rangers on the Anangu Pitjantjatjara Yankunytjatjara Lands in the north-west of South Australia and 488 kilometres south-west of Alice Springs. Mimili is home to 300 Pitjantjatjara and Yankunytjatjara people who have been living in the area for millennia in harmony with nature and acting as custodians of the land and the Tjukurpa (creation stories). Mimili was formerly known as Everard Park, which was a cattle station that was returned to Aboriginal ownership through the 1981 AP Lands Act. Mimili Community was incorporated as an Aboriginal Community in 1975.