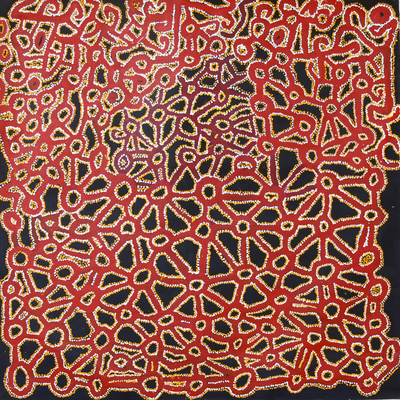 
Ned and Fred Grant are two senior Spinifex men who are brothers. They have combined here to paint the country around where each was born and grew up.

Ned Grant is a senior traditional owner of a large area of Spinifex country in the Great Victoria Desert, WA. Ned was born al Mulpula about 1941 and grow up around this area with his immediate family until his family left the Spinifex area after the Maralinga nuclear testing. Coming into Cundeelee Mission around the 1960’s with his family Ned maintained a semi nomadic life between the mission and the bush.

Fred Grant was born at Ukatjatjara c. 1946. A southern Pitjantjatjara man, Fred grew up with parents and small family group following ceremonial cycles and surviving by traditional methods. Fred came into Cundeelee Mission as young initiated man where he lived with extended family. In the eighties Fred returned to country with older people setting up camp at Yakadunya, later developing a community at Tjuntjuntjara.