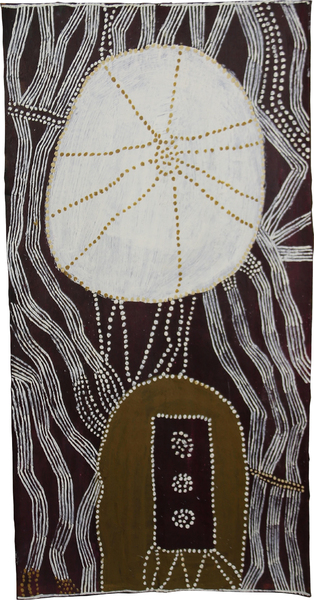 In late 2017 she made an etching with Basil Hall at Yirrkala which used a brilliant fuschia as a component colour. In early 2018 Noŋgirrŋa's friend, kin sister and gallerist Beverly Knight independently queried whether Noŋgirrŋa wanted to respond to another Alcaston artist, Karen Mills recent work which also included fuchsia. This coincidence seemed to suggest that it was a good time to add this colour to the palette when painting on these recycled print proof papers. And so in the early months of 2018 Buku-Larrŋgay went pink big time. She painted a suite of paper works incorporating bright pink which were featured in her solo show at Alcaston and also the major retrospective at AGNSW 'From my heart and mind.' Also featured in both these shows were large barks which were in a pinkish hue drawn from mixing red and white ochres. She travelled to Sydney for the opening of her retrospective on the 17th November 2018. In the days just before she travelled she made a radical move in the history of Buku. She used a pigment obtained from discarded Magenta print toner. Surprisingly at least a cup full of toner was released after the cartridge was smashed with a hammer. This was compliant with the long standing edict that artists painting sacred designs should follow; "If you paint the land use the land". This is because Gunybi Ganambarr's practice of using industrial materials dumped on the land had been expressly accepted by

the elders. She went on to paint a series of works which incorporated this magenta colour sourced from the 'empty' toner cartridges consumed by the art centre's printer which would normally have been thrown out.

Some of them show the maypal which adheres to this rock. Mekawu (or simple rock oysters). Some are the duŋgurrŋaniny (barnacles) which she says nibble on the feet of the oyster gatherers whilst they perch atop these rocks.