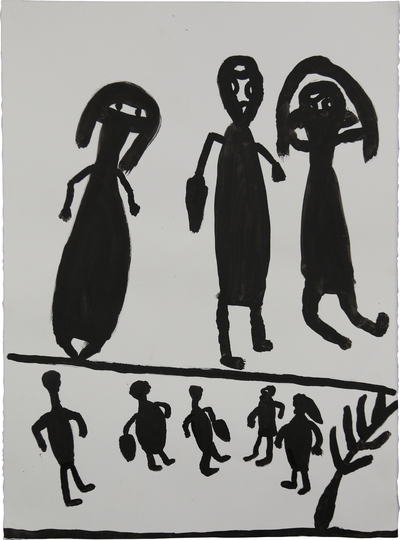 
Long ago, two spirit men called Djirrawit and Nyäluŋ made a fish trap (dhawurr) in the Gurriyalayala River at Wandawuy. The fish trap was made of upright posts forked at the top with a long crosspiece sittng in the forks. The space between was filled in with more upright sticks (dharpa) interwoven with horizontal sticks.

Then Djirrawit and Nyäluŋ cut pieces of bark from the dhaŋgi tree, pounded them to release the poison, and threw them into the river. The poison in the bark turned the water black and stunned the catfish (ganŋal).

To collect all the stunned fish they used their fishing spears (gara) and double-sided triangular fishing nets (ganybu) made of bush string (raki’). Djirrawit and Nyäluŋ got the idea for the special shape of these nets from watching pelicans (galumay) catching fish in their big bills.

Yolŋu people learned from the two spirit men how to catch fish this way, and still do sometimes when there is a big gathering of people needing much food.

The squared design called gapu (meaning water) which is used in paintings of this story is a special clan design belonging to the Djapu clan from Wandawuy and represents that country (wäŋa). Several other Dhuwa moiety clans own small parcels of land/water (riŋgitj) in this area and this is represented by the squared design, but the design itself belongs to Djapu people.

The dhaŋgi story is told in the sacred songs (manikay) of Djapu people and danced at ceremonies (buŋgul). When Yolŋu dance galumay, they open and close their arms as though opening and closing these fishing nets.

Wandawuy is also associated with the Thunderman, Bol’ŋu. In ancestral times, Bol'ŋu travelled from Wessel Islands south through various Dhuwa moiety clans' country. He was both man and cloud, the heavy cloud wolma which brings the first rains of the wet season. He travelled in the clouds, and rain fell when he urinated.

As Bol'ŋu travelled through the country, the Dhuwa clouds and the rain followed him. Rivers and creeks and springs with freshwater for the dry season formed. And he said to himself, let it be like this always. As he passed by Bol'ŋu named the rivers and springs at the sites he visited. He named trees and antbeds, and these are still the names for all these things at these places.

In each clans' country Bol'ŋu gave ceremony and law to the people. He taught songs and dances and the designs that belong to each of the clans, and he taught initiation ceremony to make the young boys men. The song cycle describing his travels is sung at these ceremonies.

The Dhuwa clans that sing Bol’ŋu all have a special piece of rainforest belonging to Bol’ŋu. From this rainforest small thunder clouds rise from each territory. They also belong to Bol’ŋu. He has brought them all together. When curved lines are painted these are representative of his spear but also the clouds from the territory of the following clans; Rirratjingu; Datiwuy; Ngaymil; Djapu; Djambarrpuyngu; Bararrngu and Dhudi Djapu.