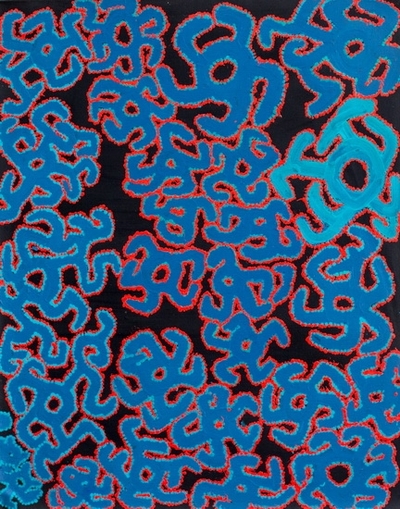 
Roy Underwood is a recognised senior custodian and keeper of Tjukurpa in the area of Miramiratjara in the Spinifex Lands. Tjukurpa is the Pitjantjatjara concept for describing the formative creation where ancestral beings create the world. These beings are Anangu ancestors, who can take the form of people, plants or animals. They traverse the country; forming the world we live in, creating the waterholes, the trees, the clay pans, the rocky outcrops, the sand hills and the Spinifex plains. These land formations are the physical manifestation of the creation energy and tangible evidence that this Tjukurpa is true.

The area of Miramiratjara is an extremely important men’s site and much of the detail of this story cannot be publically discussed. As Roy says miil-miilpa, sacred. It revolves around Wati Kutjara, two ancestral men. One man had speared a malu, kangaroo, and cooked it up but when he went to eat it there was only a very small tail. "Hey how come no meat?" As he was holding the tail it kept catching fire and as he blew onto it the sparks landed in the country setting it ablaze. All Miramiratjara was on fire. All the snake men, the guardians who reside just below the surface came up furious, biting out in rage. Many men died in the fire.

Burning off in this area is not practiced by the Spinifex people as this country is miil-miilpa and too dangerous to disturb. Miramiratjara is an important soak, an often-scarce source of water in the desert and a place associated with conflict.

This site belongs to Roy through his Grandfather. As a child he remembers waking here in the night and all the men singing the inma – miil-millpa pulka, a powerful and dangerous place.