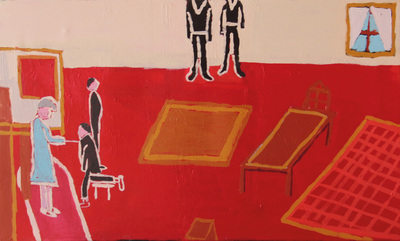 
Vincent is a young dynamic artist whose works are both loose and bold in their painterly construction, equally they are conceptually rich and divers. The grandson of famous watercolourist, Albert Namatjira, Vincent's practise is a paralleled investigatory journey of self-discovery, and search for identity.

In his painting, Vincent has worked with a minimal yet bold palette to create a sparse interior room setting that reflects on his grandfather's life with highly personalised resolve. The painted scene alludes to the event in 1953 when his grandfather was awarded the Queen's coronation medal, and subsequently travelled to Canberra to be presented to her majesty the following year.

A semi-draped window in the top right of the canvas offers a point of access between the highly stylised composition of the interior setting and the natural outside world. Positioned loosely within the painting are seemingly incidental and crude furnishings, such as the bare rug and rudimentary single bed. Queen Elizabeth II, an orderly officer, and a knight-elect - depicted kneeling on an investiture stool, engage in a knighting ceremony to the left of the painting. Two headless figures cloaked in black, appear powerful yet transcendental in the centre of the painting; they neither engage with the scene around them nor return the viewers gaze, yet their encroaching presence evokes a sense of commanding observation and acknowledgment.