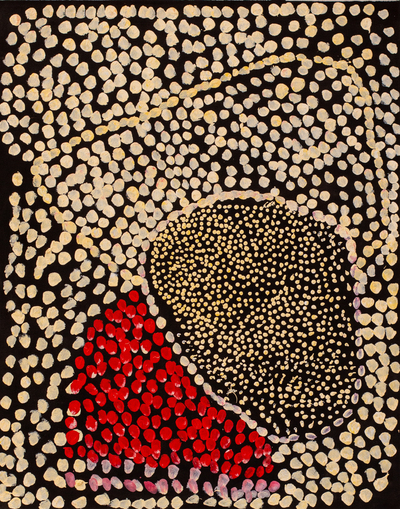 heart of the Great Victoria Desert. This is a very remote and special place, holding true wilderness character, like Mick

himself. Other Anangu (Aboriginal people) refer to Mick as a wild man, ferocious like the old men used to be before people

were softened by modern living.

Mick Rictor gives us freedom to contemplate. His compositions are both painterly and sparse, leaving form and space

intertwined and suspended. He is not quick to paint and peruses the blank canvas with hand on chin like Rodin’s The Thinker for a long period before selecting colour and brush to begin. But still it is a slow rhythmic placement of individual ‘dots’ that build up sometimes as a single colour, sometimes as multiple colours, one blanketing the other. His works reference the landscapes and changing colours of the Spinifex Country, the sweeping plains nestled in between parallel lines of sand dunes, the red rocky granite outcrops on the northern boundary, the sacred waterholes and their wanampi (serpent guardians) and mamu tjina (sorcerer’s footprints) from the Tjukurpa.