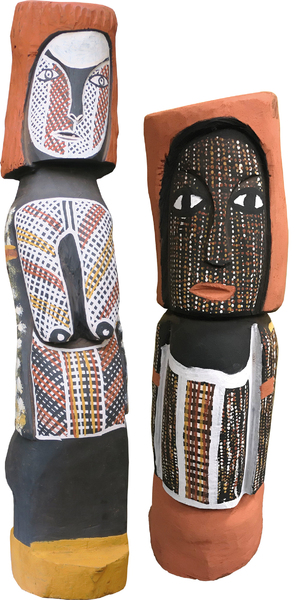 
Purrukapali was Mudungkala's only son. Every day his wife Bima went out gathering food for him, accompanied by their young son Jinani. In the same camp lived an unmarried man, Japara, who used to persuade Bima to leave her child under the shade of a tree and go into the forest with him. On one very hot day Bima neglected her son too long and he died in the hot sun. On hearing of the child's death, Purrukapali became so enraged that he struck his wife on the head with a throwing stick and hounded her into the forest. In an effort to help the anguished father, Japara promised to restore the dead child to life within three days, but Purrukapali was inconsolable and the two men soon became locked in a deadly struggle. Purrukapali picked up the dead body of his son and, walking backwards into the sea, he decreed that death should come to the whole world. As his son had died, the whole of creation would die and, once dead, never again would come to life. There was not death before this time.The place where Purrukapali died, on the east coast of Melville Island, became a whirlpool so strong that anybody who approached it in a canoe would be drowned. When Japara saw what happened he changed himself into the moon. But he did not escape the decree of Purrukapali, for even though he is eternally reincarnated, he has to die for three days every month. One can see on the face of the moon man the wounds that he received in his fight with Purrukapali. Bima, still bearing scars on her head, became Wayai, the curlew bird, that still roams the forest at night, wailing in remorse for her misdeeds and for the child that she lost.

Skulpturen aus Holz passen sich unterschiedlichen Raumtemperaturen an. Kleine Haarrisse sind bei diesen Arbeiten daher nichts Ungewöhnliches.
Special provisions apply to this artwork. Reproductions of the artwork and its story in part or in whole in any form require the permission of the artist. We are only too happy to be of assistance in this matter.