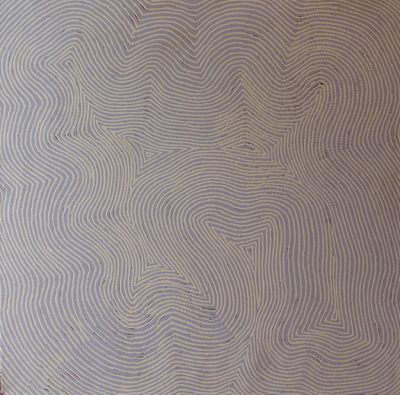 
This painting depicts designs associated with the swamp site of Marawa, situated slightly west of Wilkinkarra (Lake Mackay). There is also a rockhole and soakage waters at this site. During ancestral times a large group of Tingari Men travelled to Marawa from the west, and after arriving at the site, passed beneath the earth's surface and continued travellling underground. It is also said that a huge ancestral snake sleeps in this swamp.

Since events associated with the Tingary Cycle are a secret nature no further detail was given.

Generally, the Tingari are a group of mythical characters of the Dreaming who travelled over a vast stretches of the country, performing rituals and creating and shaping particular sites.

The Tingari Men were usually followed by Tingari Women and accompanied by novices and their travels and adventures are enshrined in a number of song cycles. These mythologies form part of the teachings of the post initiatory youths today as well as providing explanations for contemporary customs.