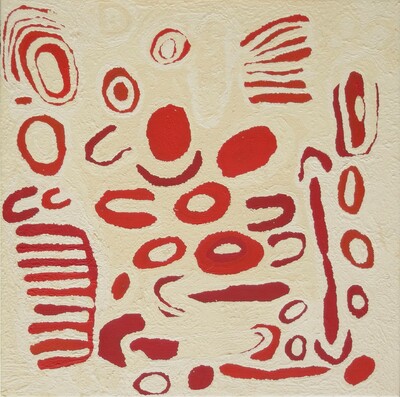 
This painting depicts designs associated with the soakage site of Watanuma, north-west of the Kintore Community.

A group of ancestral women, depicted in the painting by the 'U' like shapes, once gathered at Watanamu to perform the dances and sing the songs associated with the area. The women also spun hair-string for making nyimparra (hair-string skirts) which are worn by men and women during ceremonies. The nyimparra are represented by the comb like shapes.

Upon completion of these ceremonies the women continued their travels to the rockhole site of Malparingya and than continued east to Pinari, also north-west of Kintore.

As they travelled they gathered large quantities of the edible fruit known as pura (also known in Pintupi as pintalyipa), or bush tomato, from the small shrub Solanum chippendalei. This fruit is the size of a small apricot and, after the seeds have been removed, can be stored for long periods by halving the fruit and skewering them onto a stick.