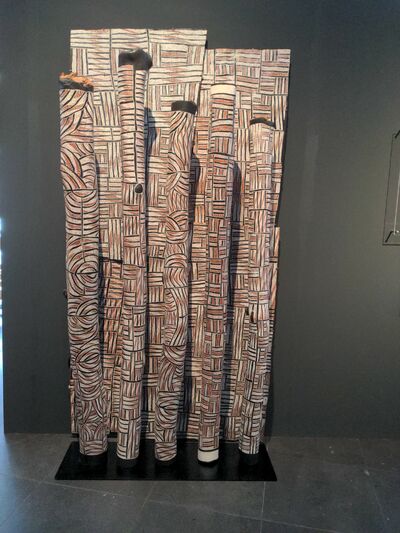 
This piece is a component in the 'Wall of Resistance' exhibited at Rautenstrauch-Joest-Museum in Cologne in 2020/21 as part of a broader exhibition called ‚Resist! Die Kunst des Widerstands.‘

The act of the artist in portraying her own and her clan's identity in this installation is a manifestation of a longstanding and continuing tradition of resistance.

The Rirratjiŋu clan of which she is a senior member has a famous history in leading the struggle against dispossession and assimilation.

Her own role as one of the ﬁrst women to paint these sacred designs embodying the essence of the Rirratjiŋu clan is to be understood in the context of her own father Mawalan Marika's leadership in negotiating ﬁrst contact with Methodist missionaries in the mid 1930's.

Her brother Wandjuk Marika was an inaugural member of the Australia Council for the Arts and championed the ﬁght against copyright infringement of Indigenous artists' work.

Her sister Banduk Marika O.A.M is a renowned environmental activist who secured protection of Yalaŋbara as a registered sacred site.

Roy Marika M.B.E. known as the Father of Land Rights is recognised as one of the key movers in the Land Rights movement which began in Yirrkala in 1962-3 with the Yirrkala Bark Petition and the Yirrkala Church Panels.

These documents used the sacred designs which denote the identity of the land, including the ones employed in the Wall of Resistance, to assert a Yolŋu resistance to the colonial project to take their land and destroy their culture.

This eﬀort which began in Yirrkala and came from key leadership including the Marika family grew to encompass the whole Australian nation and transformed the political and social landscape over the following decades.

The design here contain within it the identity of the coastal place of Yalaŋbara and the site of Rulyapa.

Yalaŋbara is as important a place as any for the Yolŋu people, especially the Dhuwa moiety, as it is the landing site of the Djaŋ’kawu - the major creator beings for everything associated with the Dhuwa.

The Djaŋ’kawu story starts when the Djaŋ’kawu Sisters arrived from their mythical island Burralku. They arrived in northeast Arnhem land at sunrise. Indeed, the name given to this part of Australia is Miwatj, or Morning Side, referring to the fact that this is the ﬁrst part of the Top End to see the morning sun. Matalatj (the elder sister who gives birth later in the story) and Bitjiwurrurru (her younger sister who acts as midwife) have just paddled their canoe a long way and then climbed the sand dunes to where they stop for a rest as the sun rises. The suns rays strike the Buwaṯa (English name Bustard) and reﬂect oﬀ the water. As this happens the Sisters sing Buwaṯa and name it. They do the same as the sun strikes two other important Dhuwa birds related to the Rirratjiŋu clan; Ḻindirritj (rainbow lorikeet) and Ŋatili (black cockatoo).

The Sisters put their paddles down and they turned into the sacred djuta tree from which they hung their ceremonial bathi or sacred dilly bags. Gowudalbudal (the male shining ﬂycatcher) who sings the tide coming in or going out sat on one of those trees. The sisters named Guḏurrku (Brolga) and Baribari (Sacred Ibis). The sisters plunge their sacred digging sticks Mawalan into the sand, creating the ﬁrst Milŋurr, or fresh waterhole on the beach. The sun rises as two Djanda (goannas) drink from Milŋurr and Ŋatili hears the crashing of the waves and sees the foam created by the meeting of fresh and salt water. From Djuta hang Mangirrikirri the fruitbats, haloed by the rising sun.

The Sisters prepare for the ﬁrst birth, a self-fertilised act of creation. Their white hair, Djawulu, is symbolic of sacred wisdom. Mawalan, is the name given to the sacred staﬀ the Sisters use to create springs and rocks and other features in their later journeys through the land of other Dhuwa clans. The design shows salt water drying oﬀ on the skin. The sun has risen on the birth of a nation; the Rirratjiŋu clan.

Other miny’tji [sacred designs] in the artwork represent Rulyapa, the rough saltwater country between Nhulunbuy and the large island of Dhambaliya (Bremer Island), ballooning up from the secret depths, around the sacred rock Manhala, which can be a manifestation of Daymirri.

Daymirri is the whale (or perhaps sea monster) that according to Rirratjiŋu and Djambarrpuyŋu clan manikay (sacred song) pertains to the saltwater country close to Yirrkala.

The dome-shaped rock Manhala exposes itself at the low tide, above the raŋ (tide marks), bleached white, a patina of brine and weather. Manhala is one of many names given to the rock. Djambarrpuyŋu and Rirratjiŋu clans have many ‘deep’ names that are intoned by the ritual specialists at the culmination of appropriate ceremony.

The sea surrounding the rock, its tidal movements, differing states and the effect it had on Yolŋu visiting this site in Ancestral times is all recorded in the sacred song. As are all the totemic species of marine life that has these ancestral connections to the Rirratjiŋu and Djambarrpuyŋu.

Often painted in this design is Daymirri the whale, Balpa the rock cod, Djumbarr the red emperor, Ḏarrpa the king brown snake and Mutjalanydjal, the dolphin. All of these things and all of their meanings are implied simply by the presence of the miny’tji for the water.

It’s not just Manhala and the power associated with deep seated knowledge that makes this area both sacred and dangerous to those entering with out authority.

There are three other rocks in the area of same qualities but these ones; Wakwakbuy, Mulŋuwuy and Dharrpawuy, are submerged.