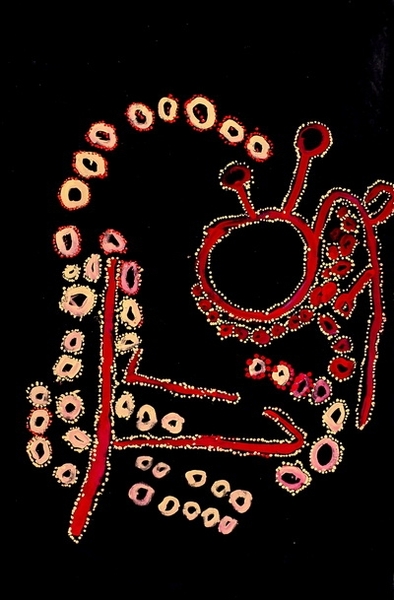 
The Wati Kutjara Tjukurpa is one of the most important and extensive stories from the Western Desert region and has played a major role in the formation, character and religious significance of the entire Spinifex area. Two wanampi (serpent beings), a father and a son from Pukara are travelling together on initiation and ceremonial business. The father is accompanying his son as he sets out on what will be the most significant and powerful journey of his life in a tribal setting. As the two snake men

pass across the country they are involved in a range of actions and events that have given rise to the geographical and mythological landscape present and maintained to this day. At Mituna, where Lawrence was born this Tjukurpa and thus the men intersect with other songlines including the Waluwuru (Eagle Man) and the Seven Sisters. Being a major Tjukurpa much ofthe detail placed into the work is miil-miilpa (dangerously sacred) and cannot be elaborated.