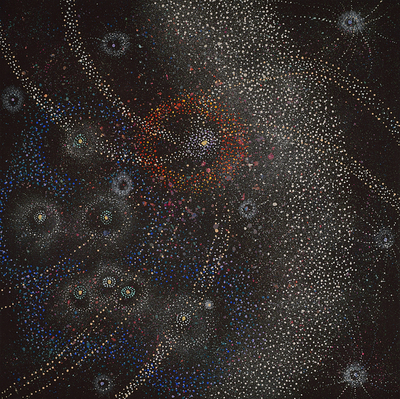 Yanjirlpirri Jukurrpa (Star Dreaming) tells of the journey of Japaljarri and Jungarrayi men who travelled from Kurlurngalinypa (near Lajamanu) to Yanjirlypirri (west of Yuendumu) and then on to Lake Mackay on the West Australian border. Along their way they performed 'kurdiji' (initiation ceremonies) for young men. Women also denced for the 'kurdiji'. The site depicted in this canvas is Yanjirlypiri (star) where there is a low hill and a water soakage. The importance of this place cannot be overemphasized as young boys are brought here to be initiated from as far as Pitjantjatjara country to the south and Lajamanu to the north.

In contemporary Warlpiri paintings traditional iconography is used to represent the Jukurrpa, associated sites and other elements. Often depicted in paintings for this Jukurrpa is the female star Yantarlarangi (Venus - The Evening Star) who chases the seven Napaljarri sisters for having stolen the night from her.