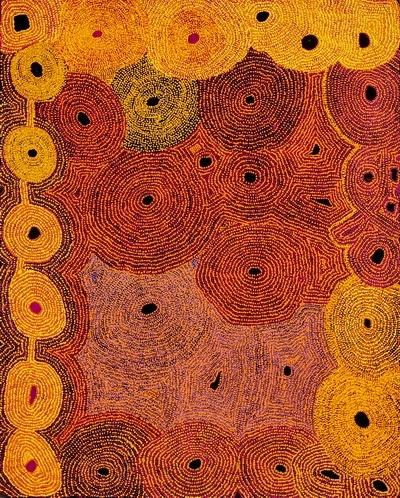 
Byron has depicted country associated with Wati Kutjara Tjukurpa (Two Men Creation Line). This is an epic that follows two men as they traverse much of Spinifex lands creating the landscape as they move through it. The two men are brothers, Mulya Maru (Black Faced Monitor) and Tingka (Sand Goanna). Byron has them beginning their incredible journey at Paupyia, just north of present day Tjuntjuntjara Community. It is at Paupyia where the men make their ceremonial hair belts before moving in a south westerly direction. They travel over one thousand kilometers, ending in Koolgardie, past Kalgoorlie. These are significant routes created for and followed by people today as they pass the significant sites and are reminded of the power of the first beings.