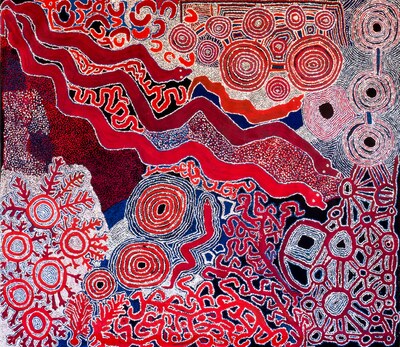 This follows the journey of a father and son water serpent, as they traverse traditional Spinifex Lands on men’s ceremonial business. They have come from the significant site of Pukara in the north where they live and will eventually return to. These two men are powerful creation beings and as such shape the landscape as they move through it, leaving a physical and moral map that still guides Spinifex people today. Each man has painted country that he has custodial responsibility or the cultural authority to speak for through birthright or paternal links.

As the country and Tjukurpa unfolds during the creation of a major work like this, the men ‘sing the place’ into reality. Traditional inma (singing and dancing) is triggered as the depictions of places, that the men may not have physically seen for many years, begin to manifest onto the canvas.