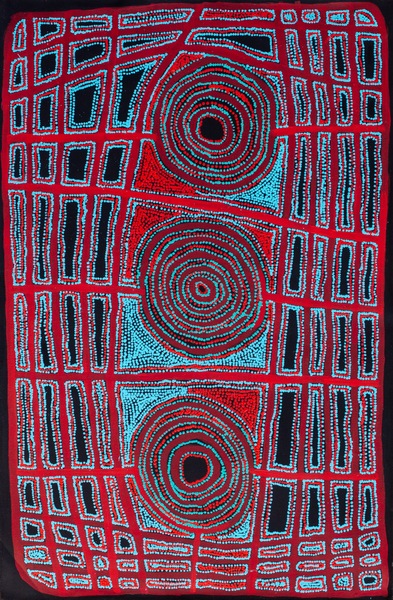 
Ian Rictor has depicted significant sites he has cultural authority of, and responsibility for. Tuwan forms part of the Tjulpu Tjuta Tjukurpa or Many Birds Creation Line which follows of a large group of Wati Nyii-Nyii (Zebra Finch Men) as they traverse their way south to the coast at Eucla. This is milmilpa, a sacred story and is only briefly spoken of in hushed tones. The other site depicted is Kamanti which consists of two rock holes that are the physical and geographical reminders of Wati Kutjara or Two Men Tjukurpa. This is an epic that follows a father and son water serpent as they travel the Spinifex Lands on ceremonial business.