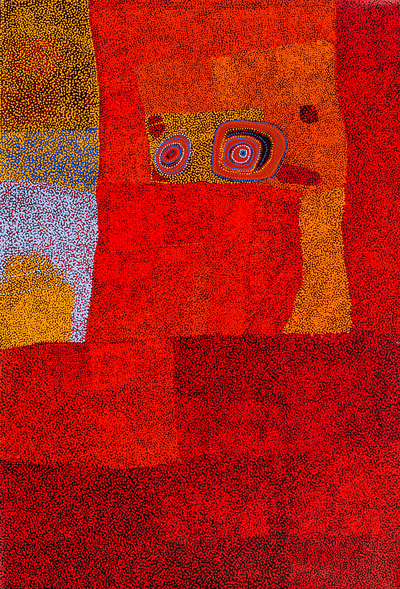 
Noli has depicted the significant site of Kamanti situated in the north of traditional Spinifex lands. This site holds s the Wati Kutjara Tjukurpa (Two Men Creation Line) and is an epic narrative following the movement of a father and son water serpent who traverse the Spinifex Lands on ceremonial business. Noli depicts country he was born into and which formed his religious upbringing. The arid but spiritual environment was the birthplace of the creation beings who shaped the landscape as they moved through it. They left indelible physical reminders of their power in the form of creeks or rocky ridges or a type of tree. But mostly they left their place of abode or the life giving sought after source of precious water, in some form of catchment. This water source is the embodiment of survival within the remote desert extremes with the sites being venerated as such and usually guarded by beings who shifted through the realms. They are the characters who dramatise the landscape and give rise to the formations through their movements. They leave behind a mapped moral landscape that holds an elaborate oral religion of song and performance that still permeates Noli's daily life.