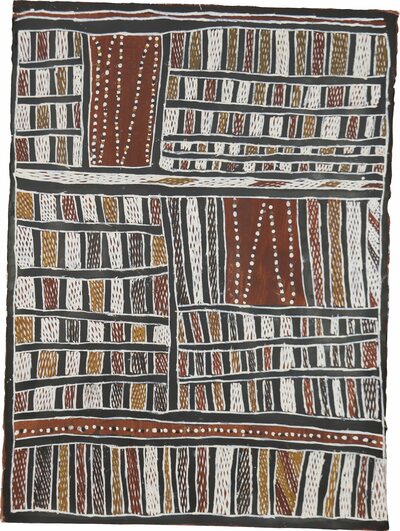 
The cross hatching grid pattern is the sacred design for the freshwaters of the Djapu clan at their homeland Wandawuy now an outstation about 150 kilometres south of Yirrkala and inland from Blue Mud Bay.

This Djapu clan outstation (and spiritual residence for Ancestral Beings Mäna the Shark and Bol’ŋu the Thunderman) is surrounded by permanent freshwater. Rains inspired by the actions of Bol’ŋu feed the rivers and fill the billabongs. Catfish and mussels, freshwater crayfish and others feed the Yolŋu and wild life. The waters are home for the shark Mäna.

The grid refers to the landscape of Wandawuy- a network of billabongs surrounded by ridges and high banks. Its structure also having reference at one level to woven fish traps. Ancestral Hunters set a trap here to snare the Shark but to no avail. These Yolngu people are called Bärngbarng and Monu'a who came to cut the trees named Gu'uwu, Gathurrmakarr, Nyenyi, Rulwirrika and Gananyarra - all Dhuwa trees. They used straight young trees. And cut them with their axes called Gayma'arri, Bitjutju.

Areas of the river are staked by the Yolŋu and branches interwoven through them. Then the water is polluted by a particular pulped bark that anaesthetises the Gaṉŋal that hobble to the surface. With nets constructed similarly to the the beak of Galumay the Pelican the Yolŋu wade through the waters scooping up the fish. It has been fished since Ancestral times. Gaṉŋal the catfish, totem for the Djapu is ceremonially sung as is Galumay the pelican. Both these species frequent the waters of Wandawuy.

Mäna the Ancestral Shark in its epic travels comes through this way. These ancestors try to trap Mäna in the freshwater by means of these traps in the waterways. They fail. The powers and physical strength of the Shark overcome the efforts of mere mortals. Mäna’s ire and thrashing tail smash the trap and muddy the water. They witness however the strength of Mäna and sing his actions, the thrashing of his tail for one, the muddying or contamination of the water.

The grid lines having reference to the trap, the cross hatched squares referring to differing states of the freshwater - the source of Djapu soul. At ceremony appropriate participants for mortuary rites enter the shelter (woven together like the unsuccessful trap) where the deceased has been lying in state. Sacred spears tipped with stingray barbs, manifestations of Mäna’s teeth, stand up alongside the shelter. The sacred song cycles of Mäna in the water at Wandawuy are intoned with music from the Yidaki (didjeridu) and Bilma(clapsticks). At the prescribed time at the conclusion of ceremony the dancers crash through the deceased’s shelter imitating the actions of Mäna at the trap. This action has reference to the release of the deceased’s soul, back to the sacred waters of Wandawuy to be reunited with its ancestors awaiting rebirth.

Wandawuy literally means place of the Sharks head where in the larger context of the song cycles of Mana’s journey his head came to rest after being butchered and distributed through the land.