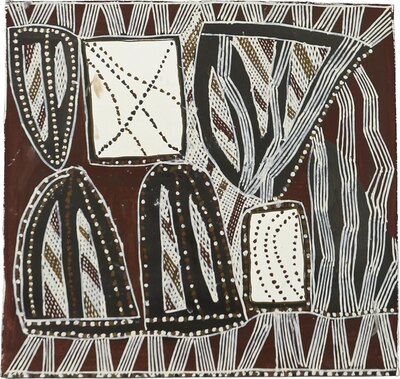 Some of the designs show the rock set in deep water between the electric ‘curse’ that the snake spits into the sky in the form of lightning, and the spray of the sea trying to shift the immovable rock foundation of the Madarrpa. Yurr’yunna is the word used to describe the rough waves overtopping the rock and the spray flying into the sky. It is said that the serpents ‘spit’ lightning- ‘guykthun’. The extended meaning of ‘guykthun' though includes “make something sacred or taboo through saying magic words’. In our language we ‘swear’ an ‘oath’ which sanctifies the speech but both words can also mean to utter profanities. We also understand that ‘curse’ can mean bad language but also a spell. The Top End has one of the world’s greatest number of lightning strikes at this time of year. These works show the sanctifying words being spat across the sky in lightning form. The lightning’s sacred power hits the seaspray rising from where it has just smashed into the rock. The energies captured in this painting are almost a match for those in the real life of a Top End Wet Season.