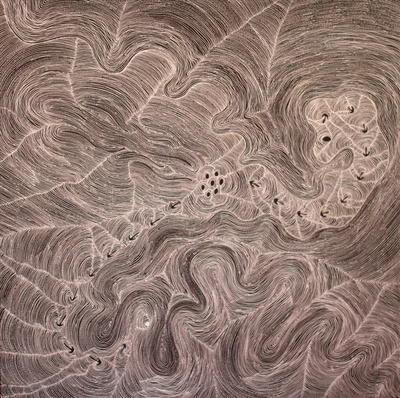 
The diver is a little water bird that can dive down deep, he cannot be trusted but the little black duck and the diver became friends for life, this is their story.

The diver and the duck were of opposite skin Inyurpa – Miri Kutjupa opposite moity people have different skin. When they were tjitji’s nyitayira (young men) they both lived side by side and were very close. They swam at the same tjukula (water hole) they were malpa mulapa (good friends). The water hole started to dry up and there was not enough water left for both of them, so they had to go out and find water elsewhere. The diver found another pool of water but did not tell the duck. One day the duck followed the diver where he found the diver swimming around and playing in the mud. The duck was angry at the diver, so he threw a boomerang and hit him. The duck said to the diver “Why didn’t you tell me you had found a waterhole? You are supposed to be my friend and you was making me perish”. The duck kept throwing sticks and boomerangs at the diver. The duck then jumped in the water and started to swim after the diver, but the diver was too quick, and the duck could not catch him.

This tjukurpa was told to me by the elders when I was growing up in Quorn. The traditional owners Adnyamathana people of that area shared a lot of stories to us. This tjukurpa teaches children about respect, betrayal, and friendship. I tell this story and remember my friend, Grantley Ryan, now deceased. We are still best friends because we had a great respect for one another.