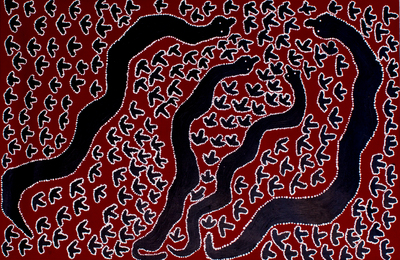 
It is at Mulaya where the Wati Kutjara Tjukurpa (the Two Ancestral Serpent Men) move through and tells the story of a father and son wanampi (water serpents) travelling from Pukara on initiation business. The son is said to be slightly crazed with strange eyes and while at Mulaya he is teased by the snake children residing there. One night he sneaks away from his father’s camp and returns to Mulaya to take his revenge on the children. He wreaks havoc there and eats the children only to be speared as he is making his departure and staggers back to his father’s camp.

This is only part of a much bigger and complex story that involves traditional Law and the way one should conduct themselves.It is the Creation beings who, as they traversed the country created the landscape and paved the way and the law for people to live by.