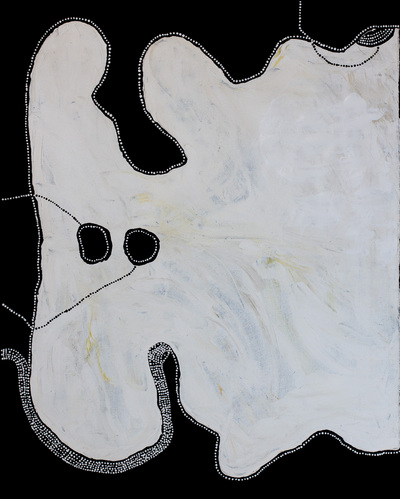 
Timo Hogan applies the paint to Lake Baker with the quiet authority of someone recreating the country they know intimately. He surveys the Tjukurpa (Creation Lines) of his birthright and brings them into focus on the two dimensional plane. In this painting Timo has depicted Wati Kutjara Tjukurpa (Two Men Creation Line) which within Lake Baker forms a major portion and is where the two men encounter a powerful Wanampi (water serpent) that resides there. Timo narrates the movement of the Wanampi as he departs his kapi ngura (home in the waterhole) in search of food. Along the perimeter the Wanampi sights the two men but chooses to continue on his search. Meanwhile the two men realise they are being watched and stay completely still until the danger has passed. These characters are the creation beings who shaped the landscape as they moved through it, leaving the indelible physical reminders of their power and presence.