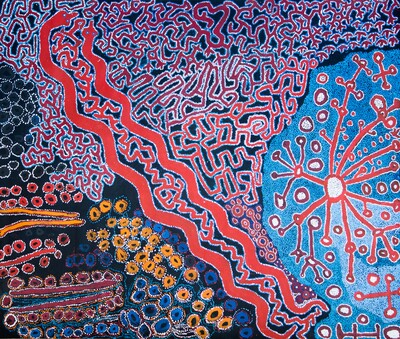 
Lawrence Pennington, Simon Hogan, Roy Underwood and Winmati Roberts, four senior Spinifex men have collaborated in this major work of Pukara. The Wati Kutjara Tjukurpa is one of the most important and extensive stories from the Western Desert region and has played a major role in the formation, character and religious significance of the entire Spinifex area. Two wanampi (serpent beings), a father and a son from Pukara are travelling together on initiations and ceremonial business. The father is accompanying his son as he sets out on what will be the most significant and powerful journey of his life in a tribal setting. As the two snakes pass across the country they are involved in a range of actions and events that have given rise to the geographical and mythological landscape present and maintained to this day. At Pukara while the father was sleeping the Anangu children from the area crept into the camp. They called out relentlessly taunting the son. Teasing him saying his eyes were bulging like eggs. The son who was already unstable got wild and hit out at the children. In a frenzy he killed and ate them one by one and then threw up.

Being a major combined men’s painting much of the details placed into the work is miilmiilpa (dangerously sacred) and cannot be elaborated. In documenting a work such as this the men will identify the major sites shown, leaving the knowledge about what is at, or passes through that site, known only to those who have the status to already know. It should be noted that this painting covers sites across hundreds of kilometres. Sites shown in this work include: Pur Pur, Piralungka, Kamanti, Nyuman, Puntaru, and Tjilitjipi.