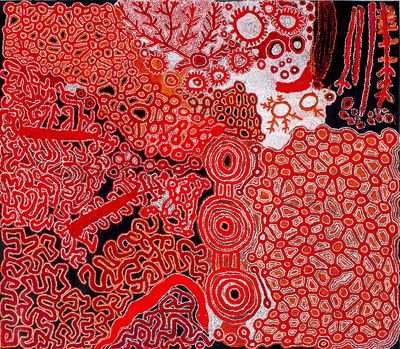 
Six senior Spinifex men have collaborated to create this majestic painting that gives us a depiction of Ngura Tjungu (Country Together). The Men have connection to a swathe of significant sites that inter relate to one another through story, song and cultural authority. There is birthright and paternal links that govern who can depict which sites but the men know the others country and the Tjukurpa associated within it intimately. It is this intimacy, this complete knowledge of one another’s place in Country and Culture that allows the men to join in such a way. Here they give us a glimpse into a way of seeing the world, a depiction of birth and creation from an intrinsically linked position where the creation of country is the story and the song.

Simon Hogan depicts his site of Lingka like a man culturally possessed as he transcends back to the place of kapi (water), wanari (mulga tree) and puli piranpa (white rocks), all surrounded by country he knows in every detail. Lawrence Pennington gives us depth of country in the unseen, as the Creation beings take minimal form and move past the site of Mituna, past the punu wara (tall trees). Roy Underwood takes us through the monumental sand ridges of Mirmiratjara as its being guarded by a powerful Wanampi (Water Serpent) who travels through the ground appearing when necessary. Fred Grant depicts the abundance of sites, the interlaced travelling tracks that carried him to this place, to Pirapi from the beginning, wandering through Country with meaning. Ned Grant follows the paths of the wata (tree roots) and takes us deep underground within the labyrinth of twists and turns, created by the first beings. We go past Palpatatjara, a site of the Two Men and surface through the Ngalta (Currajong) that holds the life affirming water for travelling through this arid landscape. Ian Rictor places Kamanti, the site representing the Two Men who made this their home on the journey of Creation. He leaves room for Tuwan nearby, where Tjulpu Tjuta (Many Birds) spring from before moving south.

This multitude of sites, of country, of fauna and flora was all created as the first beings moved though. Traversing and shaping the landscape at once, telling the story, leaving physical and moral reminders of their power and presence that people still live by today.